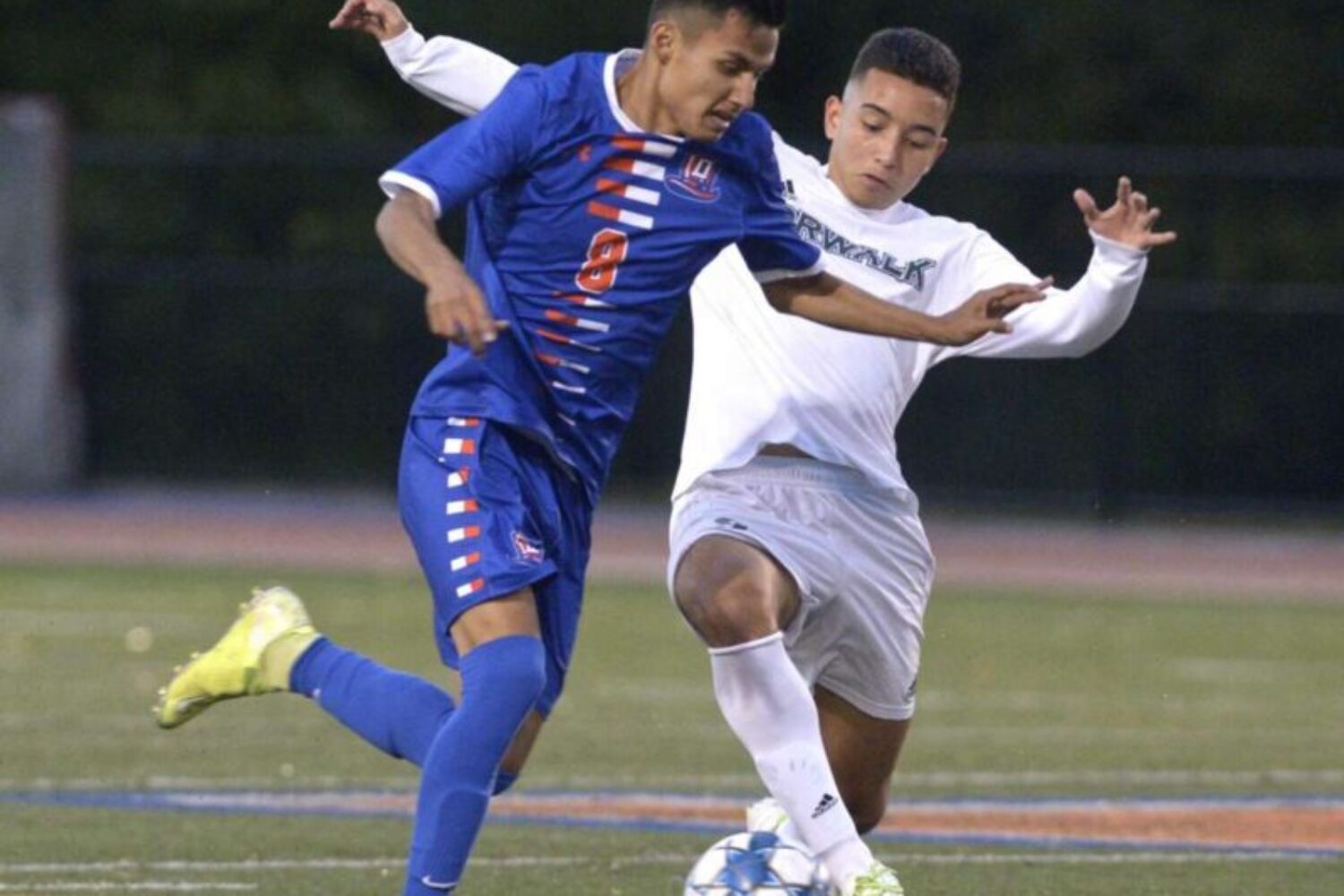 Here’s a look at the top players, storylines and games to watch for the 2021 CIAC boys soccer season

Lucas Almeida, Hall, Jr. F: Perhaps the most dangerous scoring threat in the CCC, in contention for top player in the state. He had 19 goals and 12 assists in 2020.

Ethan Bigler, University/Prince Tech, Sr., F: An all-conference pick in 2020 is back as perhaps the top player in the CRAL.

Jake Burdick, Valley Regional, Sr., M: One of the Shoreline’s top scorers last year, will contend for league player of the year this season.

Mateo Cano, Norwalk, Sr., F: Has proven he can score against the FCIAC’s top defenses.

Dan Dieck, Litchfield, Sr., D: An All-Berkshire League pick twice, one of the fiercest defenders around.

Marius Ekeberg, Staples, Sr. M: One of three former academy players now on the Wreckers roster should keep them near the top of the FCIAC.

Caden Gallagher, Farmington, Sr., M: All-CCC pick had 5 goals and 5 assists. Gallagher is a three-year starter and in contention for state player of the year.

Zach Guilherme, Oxford, Sr., D: An All-NVL and All-State pick, one of the NVL’s top players on the backline.

Basit Iddriss, Foran, Sr., D: The rightback has been playing academy soccer before joining Foran is dynamic playing out of the back.

Brayden Millbrandt, Granby Memorial, Jr., GK: Posted a .950 save percentage as a sophomore.

Sam Montalto, Stonington, Sr. F: Is on the short list vying for top player in the state. The forward, who will attend Providence College, scored 25 goals in 12 games last season. He was named GameTimeCT First-Team All-State; two-time CSCA All-State and three-time First-Team All-ECC.

Lucas Monteiro, Avon, Jr., M: A two-year starter, has established himself as one of the better possession midfielders in the CCC with excellent vision of the field.

Tyler Mucha, Morgan, Sr., D: Playing centerback, anchored a defense which had seven shutouts in 10 games. He was a CSCA All-State and All-Shoreline Conference First-Team. He scored a goal and had an assist out of the back.

Patrick Pietraszewski, Farmington, Sr. GK: A three-year starter with a stout defense in front of him, vying for top keeper in the state.

Daimon Pollard, Ledyard, Sr. F: Scored 13 goals and added 8 assists in 2020. He was named CSCA All-State and he has been selected All-ECC First Team twice.

Andreas Shaboo, Bethel, So., F: Despite being a sophomore, could be the best goal scorer in the SWC.

Anders Silberberg , Old Lyme, Jr., F: Only sophomore to be an All-Shoreline First-Team pick, could be best player in the conference this year.

Glastonbury at Fairfield Prep, Sept. 11, 5 p.m.: Holy crossover. Two of the best teams in Class LL meet up in this CCC-SCC matchup in the season’s first weekend.

Farmington at Hall, Sept. 13, 3:45 p.m.: With All-State caliber players all over the field, there may not be a better game on paper in 2021 than this CCC clash.

Weston at Barlow, Oct. 19, 4 p.m.: Weston and Barlow played for the SWC South title last season and for the SWC title in 2018. Since 2017, Barlow or Weston has appeared in the SWC Championship game. In other words, this is a great SWC matchup.

Wilton at Greenwich, Oct. 19, 4:15 p.m.: The last two FCIAC teams to play in state finals, both in 2019, meet up in a late-season contest which should carry plenty of FCIAC playoff implications.

Stonington at Ledyard, Oct. 29, 6 p.m.: The final game of the regular season should be a doozy. All-State players Daimon Pollard and Nick Washington of Ledyard go against one of the best players in the state in Sam Montalto of Stonington.

The next win Steve Waters gets with Old Saybrook will be No. 566 and place him as the career leader in wins in the state. Waters was denied the win in the final game of the 2020 season, a 2-1 loss to East Hampton. As luck would have it, Old Saybrook opens this season against East Hampton on Sept. 9 at 3:45 p.m. Waters, who spent 36 seasons at Farmington before stepping down in 2018, has a career record of 565-91-51, tied with former E.O. Smith coach John Blomstrann. Waters won nine CIAC state championships at Farmington, the last coming in 2016 in Class LL.

ONE FOR THE THUMB

With no state tournament last season, Hand was denied the chance to win a fifth-straight CIAC Class L championship. Or should we say, delayed in seeking a fifth title in-a-row. The Tigers have a new coach in Neil Phillips and could have enough talent to make a run at No. 5. Of course, GameTimeCT MVP Scott Testori and First-Team All-State pick Jason Wallack have graduated, but Hand has shown an ability to reload as well as any program in the state.

ALL ROADS LEAD TO THE NCCC

With no teams winning a state title since 2013, the FCIAC is officially in a state title drought. In fact, when Wilton (Class L ) and Greenwich (Class LL) reached championship games in 2019 it marked the first finalists for the conference since Darien in 2015. Ridgefield being co-champions with Glastonbury in 2013 is the only other finals appearance for a FCIAC team in that time. Norwalk won Class LL in 2012.

By size, Farmington is a CIAC Class L school in boys soccer. However, the players voted to move up and compete in Class LL this fall, wanting to play against the state’s best teams. That would include having to get through CCC rivals Glastonbury (5 LL titles since 2013) and Hall (defending Class LL Champions in 2019). “I could not be more proud of their decision to take the much tougher road and compete against bigger schools,” Farmington coach Nick Boorman said. “That is what Farmington Soccer is all about. High character, courage, perseverance.” Farmington won the 2016 Class LL title and has won 12 state titles overall with three of those coming in LL.